Pledge of Allegiance Flag of Mexico

Legacy of our heroes, Symbol of unity
Of our parents and our brothers,
we promise always be faithful
to the principles of freedom and justice
that make our country an independent nation, humane and generous,
to which we give our existence. 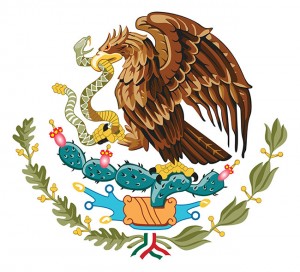 This civic holiday celebrates the Mexican flag and honors previous iterations. The holiday dates to 1937, when it was implemented by then-president Lázaro Cárdenas. The national flag, which features vertical stripes of red, white and green with the national coat of arms in the middle of the white stripe. Photo shows  Mexico Flag with enlarged coat of arms.

Mexicans first celebrated the country’s current flag on February 24, 1937. The design of this flag was used in 1821 and the current flag was officially adopted in 1968. Its colors – red, white, and green – are the National Liberation Army’s colors. 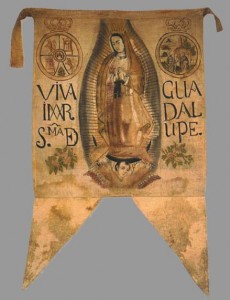 Standard of the Virgin of Guadalupe carried by Miguel Hidalgo during the start of Mexico’s War of Independence in 1810. Image by Marcuse

Brief History of the Mexican Flag
The first flag was the banner of the Virgin of Guadalupe taken by the Atotonilco Chapel by the father of the nation, Don Miguel Hidalgo.  In Zitácuaro, Michoacan , on August 19 , 1812, emerged the flag of Generalissimo Morelos. This was a white frame with white and purple squares on the edges, an imperial eagle on the center, surrounded by a caption that says: ” UNGUIBUS EQUE VIC TRIX OCULIS ET”.

The Pennant “El Dolente de Hidalgo” was another flag used by the insurgents in the principles of the cause; it was red with crossed black stripes, a skull on the center of two crossbones in form of a cross.  The flag of the Insurgents, which was greeted with 19 cannon gunshots in New Orleans, it was formed by three vertical stripes: white, purple and red. 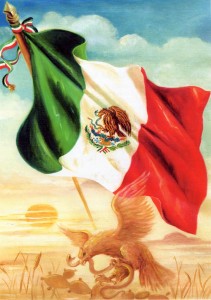 “Trigarante Army Flag.” Born to the proclamation of the ” Plan of Iguala ” on February 24, 1821 , this date was subsequently chosen to celebrate the ” Day of the Flag ” .
The colors of this flag were the same as current and actual one, but placed differently and in diagonal stripes: first white , symbol of the ” Religion” , the center green ¨Independence¨, and finally the red symbolizing the “Union”, in the green stripe center there is an imperial crown with the motto of the three guarantees.

The Iturbide Empire Flag, replaced for the Iguala Flag, was the first to adopt the order of the present flag colors and the eagle in the center area , the difference was the position of the eagle holding an imperial crown.

The Republican Flag, enacted on April 14, 1823, was the most similar to the present flag; on this one appears the eagle but changed by placing it in front. The National Flag, as we know it today, waved for the first time in the National Palace on September 15, 1917.

Back in the days, Spain had the last word. But today, and honoring Mexico’s festive mood, the Spaniards have sent back Hidalgo’s flag. It is the very flag that had been captured in Mexico in 1810/1811. It had been brought to Spain and put on display there in the Spanish Museo de Artillería (Artillery Museum).  Here is the good piece: 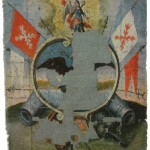 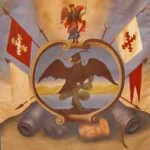 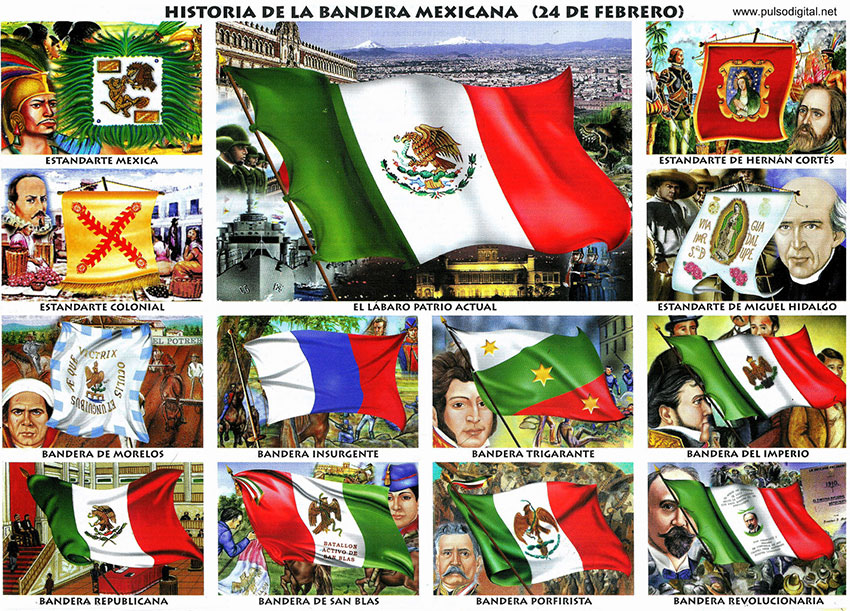